My family on my dad’s side are a bunch of nautical nerds. They all grew up going to beaches in Rhode Island and skulking around the boat yards year-round, admiring hull shapes and buying throw pillows with anchors on them. My uncle was roundly mocked when he bought a small motorboat for joy-riding instead of a proud wave cutting sloop or something; my own father has a tiny sailboat in the backyard, ossifying on a trailer while it waits for its day to shine again.

My sister and I had neither the patience nor the aptitude for sailing when we were young and took it to our town lake, but I developed a love for the narratives around the ocean and sailors of old. My father showed me the movie Master and Commander: The Far Side of the Ocean maybe a few years too early, but it captivated me. Later when Pirates of the Caribbean (the first one, and only the first one) came out I devoured it, and circled back to Disney’s 1950 take on Treasure Island, then came back to find the remake of Sid Meier’s Pirates! as the almost-perfect pirate game to act out my fantasies, though in later playthroughs it’s not tactile enough and maybe a bit too opaque to keep my attention.

When Rare announced Sea of Thieves a while ago, my interest piqued immediately, and with the opportunity to jump into the “final beta” over the weekend I got some of what I always wanted, but also a bunch that I didn’t.

Launching into the beta gave no tutorial, no basic setup; it was a dark and stormy island, and we had spent thirty minutes getting Emily and I to join Nathan’s crew, circumventing the game’s own matchmaking system and using the Windows Xbox app instead. I tried to remember the nautical vocabulary my dad had passed down to me: mizzenmast, jib, hoist the sails, in irons, the weather gauge, etc.

We spent the majority of the day hunting treasure and fighting the same skeletons over and over again, which felt hollow not only because we weren’t getting paid due to a glitch in the beta, (getting paid anyways was pointless anyways seeing as that gold would only exist until we spent it, the end of the beta wiping our information) but because it was circular and insular - there was no reason to adventure other than to get those chests. We wondered aloud asking will there be public spaces where we can drink and dance with other crews? Will there be an overall narrative, even flavor text to help us roleplay?

It didn’t help that the bright and colorful visuals of the e3 trailers was gone most of the time, replaced by nights and tempests so dark that we had to crank the brightness of our monitors to see anything at all. We had barely seen any players either; the one we did had snuck onto our ship at an outpost without noticing, trolling us with his concertina until Emily found him sleeping on the bed in captain’s quarters probably laughing his ass off at our incompetence as we had checked every deck. We were all deeply unsettled by the whole event.

We played for hours, deciding to end the night by going all-in on player hunting, after a quest for the merchant faction to deliver some chickens had gone disastrously. We set a course for the opposite side of the world, so that at the very least we’d see somewhere we had never seen before. We filled our sails and steered dangerously close to the sharpest rocks, ducking our three-mast galleon underneath a comically evil arch, effectively doing a 17th-century trick-shot. A storm gathered; all the color disappeared from the world and we were plunged into darkness, but the sky held closed.

In the distance Emily spotted two sets of lights, popping and punctuating sentences made of gun fire with that of cannons. Whoever won would already be limping, and become our target: now we were thinking like pirates. We rushed to check that the cannons were loaded, and that we all had bananas and wooden planks plenty, should everything go south. Someone had noticed earlier that all the lanterns aboard the ship could be put out - vivid images of Russel Crowe creating the ultimate naval diversion hit me and I extinguished every one of them. Our deck was dark as we three looked down our spyglass at the ships growing closer, taking bets on who we’d get to sink.

Turns out we’d get to sink both. We came upon them in darkness and let loose our port-side battery, hammering the bigger but weakened of the two ships as it rammed into a stony cliff. We had no time to stop and inspect the wreckage; our other quarry was already running, the wind in their favor. It was a smaller ship, designed for a crew no larger than two, and that meant they were faster. We gave chase, and for agonizing minutes they were out of reach of our cannons; if we were to turn to try and fire we’d lose the wind.

In the middle of our chase the sky opened up and rain poured onto the deck and lightning struck. After hours of bumbling with the angle and length of the sails we were a cohesive crew, loading cannons and setting a course between bouts of maniacal laughter. I felt a digital blood-lust take over, a resolve to follow this ship to end of the map if it meant a chance to sink it. I felt like I was good at a game for once, and that meant I could give myself over to the fantasy of being a scourge of the sea, the kind of player that makes other players shut the game off for the night, taking it to the logical terminus of most multiplayer games — domination. As I write those words I feel a bit of disgust at myself, at the idea of that being the most exhilarating feeling I’ve had in a game in a long time, but thankfully our enemy made sure it didn’t go the way I wanted.

Our chase continued out of the storm and back into sunny, saturated daytime, which revealed that we were about to pull into port at one of the game’s outpost islands. The other ship wasn’t hoisting his sails to slow down, and neither were we. We had made the pact that after this we were all going to bed, so might as well end it on a dramatic note, or at least try.

We rammed their sloop at full speed; the game wasn’t able to really handle it, because their ship was already run aground at the outpost island, so we kind of just stopped. Our hull sprang open and I could hear water rushing in below decks, but we didn’t care. Their ship was already sinking rapidly, but we couldn’t see the sailors themselves anywhere. And then I heard a hurdy gurdy and saw a man playing a jaunty tune on the dock, waiting for us without a care in the world. We all laughed and then ran him through with our swords to get it over with. And there we were, on a suddenly sunny dock with two sinking ships a bit of hysterical after playing for too many hours. We climbed back aboard our galleon and tried to find the funniest places to be as it sank into the ocean — I feebly attempted to climb the crow’s nest, but the game had turned off the ladder, so I stood on the poop deck until the ship disappeared below the waves and deleted itself from existence. We all met up on the dock and decided it was time to go to bed. We had conquered the seas well enough for now. 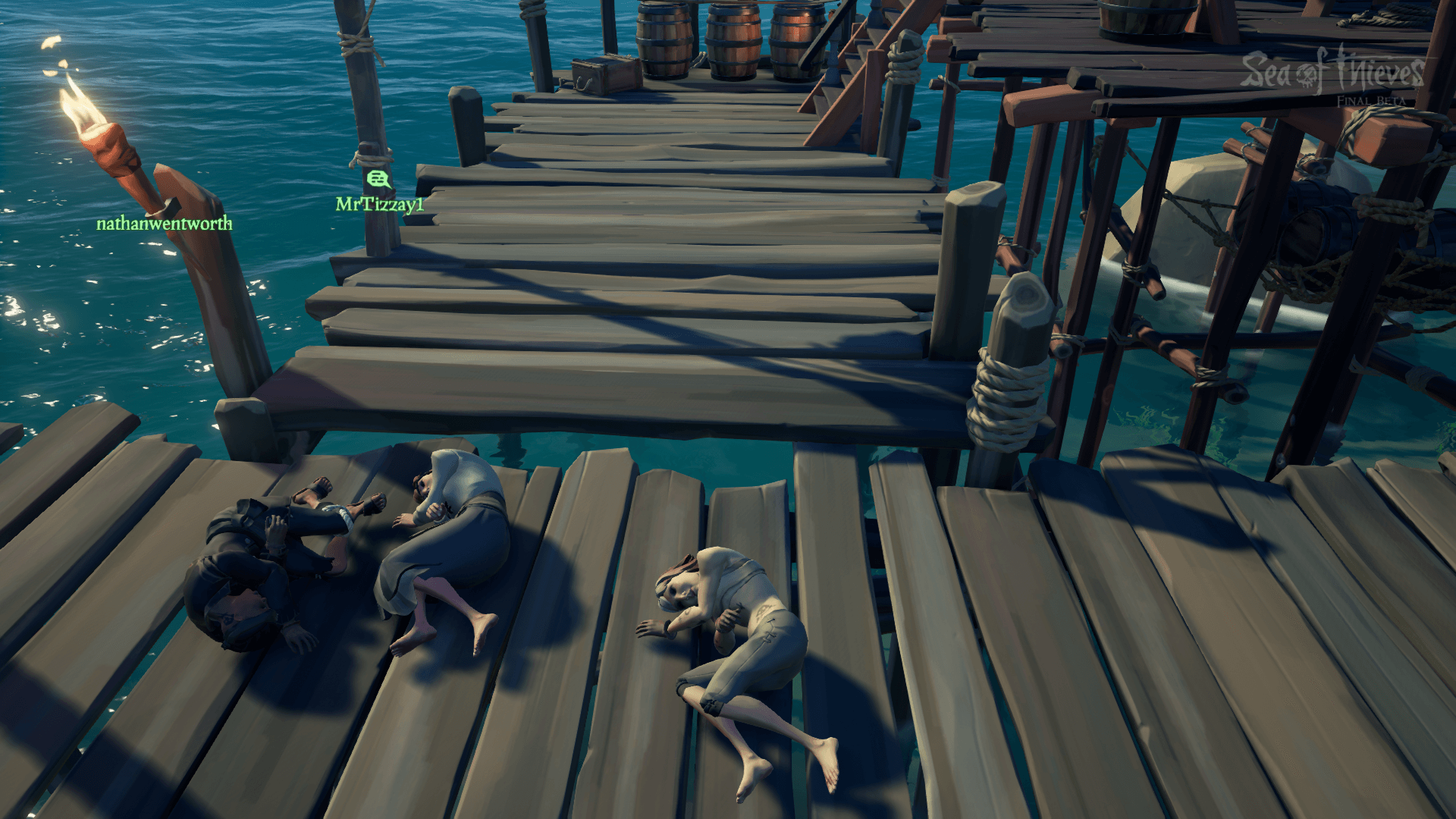